Our away match to Wicklow CC normally comes at the beginning of the season under grey skies. However, we headed out to Bray last Friday in the middle of July and during that rarest of phenomena – an Irish heatwave.

The magnificent looking outfield was still being mowed as we arrived. In fact, as Wicklow took to the field, they were one fielder short, because Sheldon, ex-Archivist and proud father of a darts prodigy, was still parking the tractor. Requests for a Dalkey fielder were turned down by Burgess, who had just poured his first glass of privately sourced Pinot Noir on the boundary and remonstrated that he could only field with one hand. The abstemious Roberts happily answered the call.

Captain Taylor decided to pack the top order with Archivists who had never played in Bray before, resulting In a new opening partnership of Singh and Simpson. While the latter played a straight bat and dug in for a long Test match innings, Singh took just a few balls to get his eye in before taking 3 boundaries of Wicklow’s third over with some powerful hitting in front of square. A fourth boundary in the 4th over took him to a quick retirement and bought Fanning to the crease.

With only 4 runs coming off the next 9 balls, it looked as if Dalkey was in danger of handing the initiative back to Wicklow. However, Fanning soon picked up the pace with some well-hit twos. When Simpson was finally bowled by O’Connell in the seventh over for a modest 3 runs, Dalkey had scored 10 runs in just under 4 overs and were in dire need of acceleration.

Sporting a fetching pair of blue shorts after his whites had been lost in a recent déménagement, Mortimer’s eyes were bigger than his stomach as he swung vainly at a succession of inviting balls in his first outing of the season. Fortunately, Fanning was steadily accumulating runs at the other end and was even cajoled by Mortimer into running an ambitious 3. This seemed to light Mortimer’s touch fuse, as his timing and touch returned with some explosive hitting that produced 3 quick fours and a straight six, before he retired on 22. With Fanning retiring soon after on 20, the Archives now turned to Burgess and Roberts to maintain the momentum. Maybe feeling the effects of his pre-match Pinot, Burgess struggled to get off the mark for an over or two. Fortunately, Roberts produced a typically effortless 21 at the other end, including 3 boundaries and yet another 3. The arrival of Gupta to the wicket inspired Burgess to hit a massive 6 over midwicket, his second max in 2 matches, but the first to be correctly attributed to him.

After Burgess soon retired on 20, the fifth retiree of the Dalkey innings, Bennett achieved the rare-for-him feat of surviving more than 2 balls, ending undefeated on 3, while Gupta finished 10 not out.

We are fortunate that Singh took photos of Burgess driving, Gupta pulling off the front foot (?) and Bennett doing his best Victor Trumper impression.*

Gupta eyes one up. But is he too late?

And so Dalkey Archives finished on 151, just 3 short of their all-time 20-over total, we are told. Unfortunately, Taylor, Mills and Irwin never made it to the crease.

Wicklow CC showed their attacking intentions straight away, taking 11 off Bennett’s first over of what normally counts as tidy and economical off-spin. The same disrespect was shown at the other end to Gupta, whose opening over cost 9 runs, but did yield the wicket of Sisley, clean bowled for 4. Just reward for keeping his nerve in the face of the onslaught.

Bennett fared even worse in his second over as he upped his pace in to staunch the flow, only to be dispatched to all corners of the ground for 14 more runs, including 2 boundaries. Although Gupta slowed things down in his second over, Wicklow were already 40-1 after 4 overs and well ahead of the required run rate.

Coming in at first change, Irwin was immediately smacked for 6 by Barrett, while Singh was unfortunate to concede 8 runs in byes due to some loose glove work behind the stumps by Mills.

After 7 over overs Wicklow were comfortable at 69-3, with 2 of those “wickets” having been retirements.

When Simpson went for 11 in his first and only over, Dalkey’s hopes receded even more. Captain Taylor responded by replacing Mills behind the stumps with the steady hands of Simpson. Could the relieved Mills find redemption?

However, Dalkey were then encouraged by a series of almost comedic air shots by the aggressive-looking Lonergan Jr. The more he missed, the harder he swung, as his impatience and frustration snowballed. Even the Dalkey fielders were asking him to calm down. At one stage, he stepped away from the wicket towards the Holy Week Cross on Bray Head, removed his sweat-stained cap and bowed his head in supplication and bewilderment.

Credit must also be given to the tight bowling of Fanning and Taylor, who conceded only 19 runs off their 4 overs. Taylor also bagged the wicket of Ward, as Dalkey dared to dream again.

However, the arrival of Hogan to the crease seemed to improve Lonergan Jr.'s timing and confidence. As the shadows of the Dalkey fielders lengthened across the outfield, so did the odds of their victory.

With his eye now firmly in, Lonergan Jr. tucked into Mortimer, taking 10 off his first over. Hogan also hit the ground running, hitting singles or twos off almost every ball. Burgess was unusually generous with wides and byes and the match was slipping away. Only a miracle could save Dalkey now.

When Roberts came on to bowl the 18th over, Wicklow were cruising at 142, only 10 runs away from their target. Dot ball. The second ball was a half-volley on middle leg that Hogan whalloped cleanly and powerfully, with what he later described as the best shot of his innings. As Dalkey eyes followed the ball’s expected trajectory to the boundary, some noticed that the ball had disappeared and Mills was lying on the ground at short midwicket. Others were fortunate to have witnessed a worldie of a catch, as Mills dived acrobatically high to his left to take a two-handed catch of a rocket of a ball. Jonty Rhodes would have been proud of it, although one suspects that images of Gordon Banks and Peter “The Cat” Bonetti also flashed through the ex-goalkeeper’s panic-stricken mind. Indeed, the catch was so good that it almost allowed his teammates to forget all the byes that he had conceded behind the stumps earlier.

Roberts only conceded one run in that over, leaving Wicklow 9 short with only 2 overs to go and their tail exposed. Game on again. However, undaunted by the close field, O’Connell and Adam saw Wicklow home with 3 balls to spare, thanks in part to some more uncharacteristic extras from the Pinot connoisseur.

Closer analysis of the scorebook revealed that the Dalkey total may been undercalculated, leading to some muttered grumblings within their ranks. However, the fact is that they should have been able to defend a total of 151 and paid heavily for some loose bowling that gifted 32 runs in extras to their opponents.

The match was played in a jovial spirit, with good-humoured repartee shared equally between batsmen, fielders, umpires and players beyond the boundary. The only exception was the surprising call by a Wicklow umpire of a Taylor dot ball as a dead ball, due apparently to some chat in the field as the ball was bowled. Maybe the natural exuberance of some Archivists had caused offence to some of the less voluble Wicklow players.

In any case, this incongruity was swiftly forgotten, as Dalkey consoled themselves with some generously served beers and Taylor and Lonergan Sr. exchanged gracious speeches.

Roberts was deservedly nominated Man Of The Match for his fine batting and bowling, but Fanning must consider himself unlucky not to receive similar recognition.

Despite some strong batting by the home team, Taylor gave the Wicklow Man Of The Match award to O’Connell for taking the only Dalkey wicket that fell during the whole match.

Man of the Match Roberts 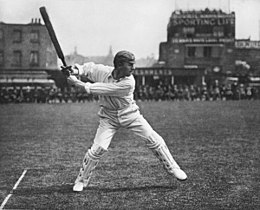 *Victor Thomas Trumper (2 November 1877 – 28 June 1915) was an Australian cricketer known as the most stylish and versatile batsman of the Golden Age of cricket, capable of playing match-winning innings on wet wickets his contemporaries found unplayable. Archie MacLaren said of him, "Compared to Victor I was a cab-horse to a Derby winner". [Wikipedia]