Buoyed by their victory against Merrion CC the week before, the Archivists headed west to the beautifully manicured grounds of Terenure College to face the Terenure Walnuts on a mild, slightly overcast, Friday evening.

This year’s positioning of the grass wicket close to the drive leading up to the school brought a large tree within the perimeters of the boundary. Our kind hosts explained the arboreal rules that would apply. Any shot that hit the tree on the full would be called a six, whereas any ball that hit the tree after bouncing would have to be run. Just as Bennett was about to ask whether they had used the heavy roller or light roller on the wicket, he was concerned to hear that no roller had ever been used! This was clearly going to be no ordinary match.

Not only were the Archivists facing unusual pitch and outfield conditions, but a spate of last-minute dropouts left us severely undermanned. Even with the callup of Simpson’s coltish 17-year-old son Harry, we were still one short. Fortunately, our over-equipped hosts offered us the services of the genial Paddy, a man clearly young at heart but several decades older than our most senior player. The once modest age range within our ranks had ballooned to more than 60 years in 24 hours.

And so Bennett and Gupta strode to the crease.

Unaccustomed to such an elevated position in the batting order, Bennett fell limply to a wide legside delivery that surprisingly found its way to his stumps via an outstretched pad.

This brought to the crease Burgess, who only 5 days earlier had stroked an immaculate 60 or so for the Law Library on a beautiful wicket at Oakhill.

A man of discernment, he immediately targeted the tree. A strong lofted off drive appeared to land on, or very close to, the tree, but the opposition called it a four in all defiance of logic and the pre-agreed rules. Protestations from the Dalkey encampment beyond the boundary about the arbitrary application of arborary rules were meet with rather feeble concessions that the ball may have hit the tree’s exposed roots. Fortunately, a detailed dendrological discussion about arboresque anatomy was averted as both teams amicably agreed on a six.

Meanwhile, Gupta was laying into the Walnuts bowling with confidence and relish. Anything pitched up was dispatched with vigour and excellent timing. However, his inevitable retirement was accelerated by an unfortunate error by the scorer, Bennett, who had carelessly given him  Burgess’s six. Gupta departed the crease with mixed feelings, surprised at his premature retirement on 20, but also somewhat relieved to have reached retirement one way or another. 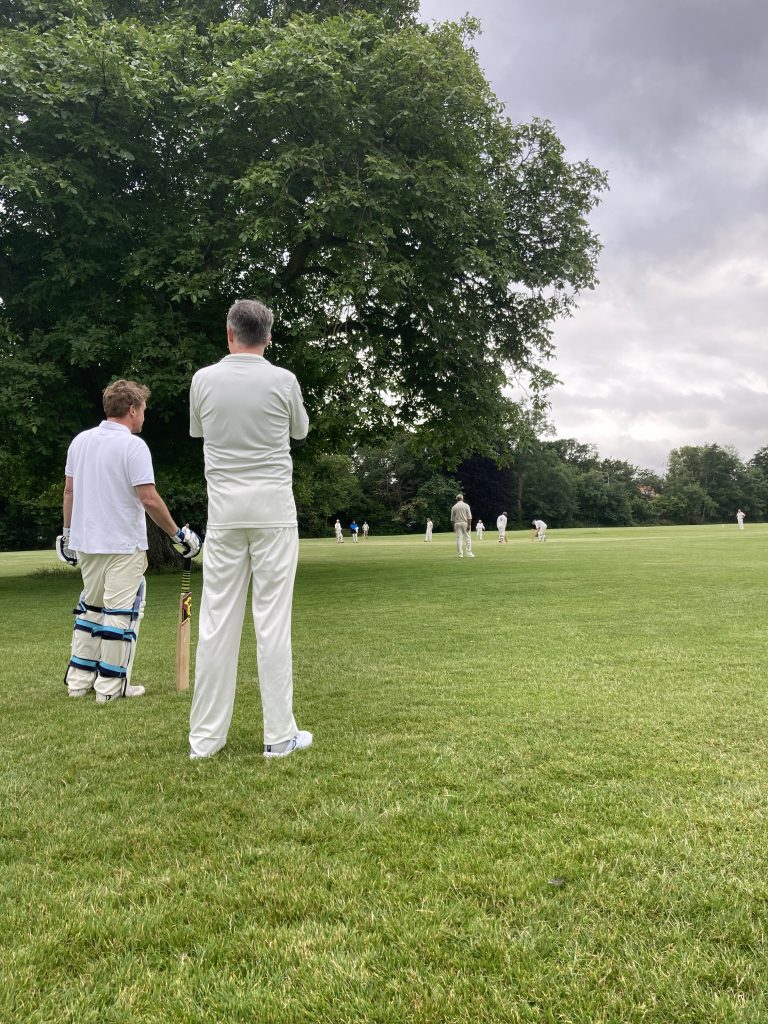 Captain Tratalos surveys the wreckage of his team's innings

However, 32-2 soon became 32-3, as Burgess, attempting one of his trademark late cuts, was clean bowled by a slow low-bouncing ball for 7. When told that he had been deprived of 6 runs by inept scoring, he accepted the injustice with typical good grace.

It was now dawning on the Archives that the unpredictable turning wicket was a greater threat than the innocuous bowling attack.

Singh hit a rare boundary, but departed, also bowled, for 6.

This brought Simpson père et fils together to resurrect an innings that was subsiding quickly at 39-4.

Young Harry, however, was no nervous rookie. Quite the opposite. For someone in the Sandford Park first XI who also plays league for Merrion CC, this was a big step down into Taverners mediocrity and unorthodox bowling actions. Worlds collided as his ultra-correct betting technique was deployed against balls projected by arms more bent than even the great Muralitharan.  And yet, with the low bounce and erratic bowling, runs were still very difficult to come by, even for someone as accomplished as Simpson Jr. Meanwhile, his father also struggled also to score. The run rate dwindled as the Simpsons dug in and the rest of the team grew impatient.

The departure of a clean bowled Simpson Sr. for 7 brought Monaghan to the crease. Always a man for a crisis, he played judiciously while keeping the scoreboard ticking over. When Simpson Sr. was bowled for a patient 7, Monaghan was joined by the effervescent Taylor in a pivotal partnership that accumulated a series of well hit singles on the slow outfield.

Good fortune also prevailed as, despite his best efforts, Taylor miraculously failed to run out his doughty partner.

When Monaghan sacrificed his wicket in the search for late runs for an invaluable 13, captain Tratalos came in at no. 10 and immediately maintained the momentum, before selflessly running himself out for 4. Taylor finished unbeaten on 12, all singles apart from one 2, and Paddy on 1, as the Archives posted a modest and barely respectable total of 90.

A mere three boundaries had been scored.

And yet the Archivists remained quietly confident.

With Paddy opting not to bowl, it was decided that wicketkeeper Tratalos would open the bowling with Burgess, while Simpson Sr. temporarily took the gloves.

The Walnuts started confidently, hitting 9 runs off Tratalos’s first over and also benefiting from 2 generous wides. At this rate, the match would be over before the 10th over!

Bowling off a shortened run, Burgess stemmed the runs with a faster ball that bowled O’Neill behind his legs for 3.

This brought to the crease O’Loan for the only meaningful partnership of the Walnut innings. When they plundered 8 runs off Tratalos’s 2nd over, they appeared to be cruising to victory.

But then the runs suddenly dried up. Burgess conceded only 1 run in his 2nd over and the first change pair of Singh and Bhown superbly sustained the pressure with tight and accurate bowling that only conceded 7 runs in 4 overs. Singh even managed the rare Taverners feat of bowling a maiden over.

But the two batsmen at the crease, captain Gould and O’Loan, now had their eyes in and were looking comfortable and potentially dangerous.

For third change, Tratalos called up Simpson Jr. and Bennett. Both batsmen were rattled by the pace of Simpson Jr. So rattled that they unwisely took on Tratalos’s arm for a quick single. His direct hit sent a disappointed Gould back to beyond the ropes for a well-constructed 16.

Maybe benefiting from the pressure applied at the other end by Simpson Jr., Bennett then picked up an easy wicket as his bowling partner took a sharp catch off a stinging off drive at extra cover to dismiss Ronan for 1.

The flurry of wickets continued in Simpson Jr’s second over, as Bennett ran out McGinn with a quick pickup and throw from gulley and Simpson Jr caught and bowled an uncomfortable-looking Walnuts batsman whose name I can’t quite make out in the scorebook.

Despite this sudden collapse, O’Loan was still looking dangerously comfortable. Until he played on to a well-pitched ball from Bennett in the very next over for 17.

With the required run rate now rising alarmingly above 6 runs per and 4th change pair Simpson Sr’s and Gupta also bowling tidily, the home team floundered on their tricky wicket and found it increasingly difficult to pierce the strategic field settings of captain Tratalos.

The result was never in doubt when the redoubtable pair of Taylor and Monaghan reunited now as bowlers for the last 4 overs. Even by his own lofty standards, the Tasmanian was extremely accurate and parsimonious, conceding only 2 runs in 2 overs. Monaghan turned in even better figures of  2 for 2 in his allotted overs, as Simpson Jnr cemented his Man Of The Match award with an outstanding catch at midwicket, taking a few steps backwards and casually plucking the ball one-handed high out of the air.

Needing an unlikely 24 runs off the last over to win, the Walnuts finally fell 21 runs short on 69.

After the match, we were generously served a wonderful spread of sandwiches, wraps and rolls in the converted car park of Terenure Rugby Club, a post-match treat that we had been sadly denied last year. As the beer flowed, there was even talk of us upping our game on that front and organizing something in the similarly transformed car park of Gleesons for our next home opponents.

Celebrating in the car park

Simpson Jr. was deservedly awarded Man of the Match for his fine batting, bowling and fielding, although we suspect that his bottle of wine may have been confiscated, if not consumed, by Simpson Sr.

The Taylor/Monaghan combo must have come in a very close second for their strong all-round performances.